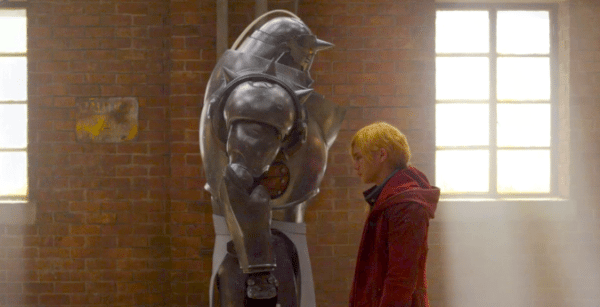 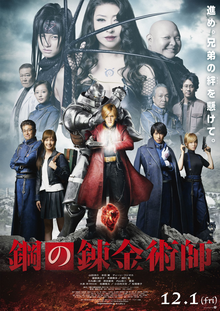 Anime was a mistake

You know what? I give up. I give up on holding out hope for a decent live action adaptation of an anime, the way I have forsaken ever getting a good video game movie. There something inherently problematic of trying to cram in to two hours what took a show 15-20 episodes of a show to tell. While comic book films have figured out that they don’t have to enslave themselves to a particular story arc in print and instead craft two hour films based on likable characters, anime adaptations routinely mess this concept up. And apparently it doesn’t matter if we have a Western studio whitewashing the shit out of a Japanese story, because Japanese filmmakers can make a much, MUCH worse adaptation of an anime than even an overrated director could. Let’s not waste any more time, and dissect this rotting corpse that dares to call itself Fullmetal Alchemist.

Based on the popular manga and anime, we find ourselves in the country of Amestris, a post industrial-revolution Germanic country with characters entirely played by Japanese actors (more on that later). In this world, steampunk technology allows people to have highly sophisticated prosthetic limbs and there are a group of scientists called alchemists, who can manipulate the environment around them by simply drawing a circle and turning one object into something else. Basically, it’s magic with a bit more pseudo-science mumbo jumbo thrown in for good measure. Anywho, two brothers, Edward and Alphonse Elric, attempt to practice the most taboo form of alchemy in order to save their mother: resurrection. Unfortunately for them, the reason it’s taboo is because shit will go horribly wrong as Edward loses one of his arms and one of his legs and Alphonse loses his entire body thereby requiring his soul to be bound to a piece of armor. In order to get their bodies back to normal, the brothers join the military as investigators and attempt to locate the Philosopher’s Stone, an object that could magnify their power enough to save their skins (literally). Too bad for them, they end up getting involved in a massive government conspiracy with manufactured monsters, human experimentation, double crosses, and assassination.

On paper, this concept is rife for exploration in any medium. And indeed, Fullmetal Alchemist was a massively popular manga during its 10-year run and it even spawned two different animated series as well as movies and video games. But even as I tried to give you the basic synopsis, it’s complicated as all get out. This does not work in the medium of film where audiences will give you two hours, at most, to get your point across. You either need to heavily rework a highly complicated story, or just ignore it and create a brand new one with the same strong characters audiences loved. And if you fail to do that, than you can at least make the film pretty to look at. Unfortunately Fullmetal Alchemist (2017) cocks up on every single one of these points and aspires for greatness…by being absolutely dreadful in every conceivable way.

First of all, the casting is the biggest lurch to get over. While I got people’s massive frustration with the whitewashing controversy with Ghost in the Shell (2017) in taking a Japanese character hanging out in a futuristic Tokyo and turning her into a white woman, it’s absolutely jarring to see Japanese actors with English-as-hell names mope around Italian villas and Germanic countrysides. It all just looks really off putting in a way calling a white guy “Goku” makes absolutely no sense (and yes, that really happened). Not helping is that all the thespians overact like the characters do in the anime with exaggerated expressions; the trouble is that it looks like a really bad comic convention showcase. Although, like comic con, everyone looks like how they’re animated counterpart should be right down to facial hair and outfits…but it’s still weird as hell to see Ed’s actor with obviously fake-ass blonde hair.

And if this were only a costume demo reel, I wouldn’t be focusing on how this godforsaken plot is barely coherent; as the movie repeats The Last Airbender‘s shotgun-tasting mistake of trying to cram an entire season of a television show in to a 2 hour and 10 minute format. It does not work, it has never worked, it WILL never work. Because you have your characters bouncing around from scene to scene with the slimmest justification of what happens from scene to scene. It’s on par with Batman v. Superman: Dawn of Justice‘s awful pacing where you have set pieces poorly stitched together, and you have to seriously wonder how the hell we got to specific moments in time. Hell, the damn movie forgets how it got to its climax, so you have characters mimic iconic scenes from the manga and anime for no bloody reason but to remind you of better shit even though their action makes no sense in the context of the film and….ABKASDDSAKLAD

Sorry…I had a minor aneurysm as I tried to recall more of my experience in watching this interminably long piece of shit. But, I’m not done beating this so-called movie up as I need to address something that affects the fans personally. See, the reason myself and others adored this story was thanks to several gut-punch moments that raised the stakes and told you: “shit got real.” This abortion of a film replicates two of the franchise’s most iconic and deeply depressing moments…and fucks them up completely. In the show and in the manga, these rug pulls were accomplished by having you give a damn about specific characters that you got to know over the course of several issues or episodes, before yanking your heart out of your chest and stomping all over it. For this Netflix catastrophe? Seven minutes of set up for each moment…that’s it. The word “offensive” gets abused a lot in Internet culture, but I found both of these moments to be offensive in this movie…it’s like smearing shit on the roof of the Sistene Chapel.

Besides the outfits, I could not find a single thing to like in this abomination. The story is rushed garbage, the smorgasbord characters are painfully underdeveloped, the visual effects are cheap as hell with some Asylum-film level CGI, and it squanders a damn great premise every chance it gets. I think I was only able to understand the movie based on my prior knowledge of the anime and manga, so I can’t imagine how confused a newcomer would look at this movie. And if the filmmakers were making this movie for the benefit of fans…they could keep this shit, because every fan will howl and cry bloody murder over the bizarre liberties taken with their beloved source material.

I honestly felt like giving this movie a pass on my lowest rating for the costume job alone…but I’m not feeling charitable right now. Especially not with Netflix, which now feels like a dumping ground for movies that couldn’t hack it in theaters. I have given that company too many D’s in the class, hoping it would finally pull its pants up and stop cocking up, but my patience is at end. Fuck Netflix for thinking this is what people want and…