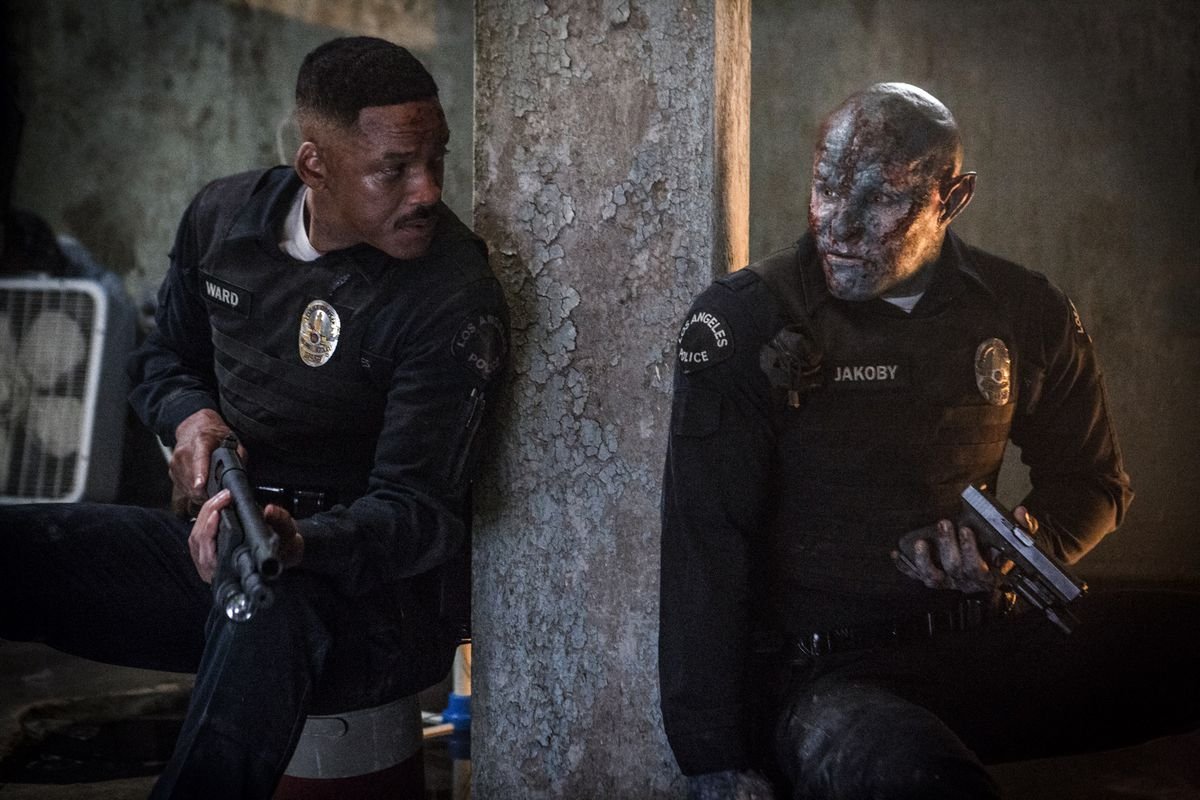 Not a bright idea

Netflix has had a scattershot of a year haven’t they? While they released some solid hits like Raw and Stranger Things 2; they also had risky projects like Mudbound, The Babysitter, and Little Evil that didn’t entirely pan out. Additionally, they’ve also unleashed some major duds like that godawful Death Note remake. So the streaming service decided to hold out its biggest gambit for the end of 2017: an urban fantasy film from the director of Suicide Squad and the writer of American Ultra with a budget of $90 million. What could go wrong?

Ho’ kay, here’s the sitch: we find ourselves in an alternate modern day Los Angeles, 2000 years after a great battle lead to the defeat of a Dark Lord. In LA, tensions are high between the three main races: the affluent and powerful elves, the working class and highly racist humans, and the extremely poor orcs. Amidst all this Respected and human Officer Ward (Will Smith) is forced to partner with the police department’s first diversity hire: an orc named Jakoby (Joel Edgerton). Jakoby is resented both by the racist police who find all Blacks sorry, orcs (the metaphor is so painfully amd awkwardly delivered that it was hard remembering this was a basic fantasy setup) to be evil; and Jakoby is similarly shunned by other orcs as a traitor to his race and a wannabe human.

But both Ward and Jakoby get roped into a large conspiracy when an elfish girl named Tikah (Lucy Fry) comes into their view with a magic wand, a rare magical artifact that could be said to grant any wish, but is as dangerous as a nuclear weapon to many people. Only individuals called Brights can wield a wand without making someone blow up, and an evil group of Brights lead by an elf named Leilah (Noomi Rapace) want to use Tikah’s wand to ressurect the powerful Dark Lord, plunging the world into chaos. So Ward and Jakoby have to put aside their differences and take on scores of gang members (both human and orc), corrupt police officers, federal agents, and the aforementioned evil elves in order to make sure the magic wand doesn’t fall into the wrong hands.

I think you can see what’s alright and what’s wrong with this film in my plot synopsis. You have a strong set-up that immediately gives way to cliché from both fantasy films and cop dramas. This is especially obvious when several scenes remind you of the director’s (David Ayer) previous work in Training Day and End of Watch, when everything from the soundtrack to the composition of the scene gives that effect of a grimey and ugly police procedural. The fantastical elements really don’t distract you from the fact that this is anything new, but in fact reminds you of better fantasy fare as the film wallows in heavy-handed and clumsy metaphors when it isn’t ripping off every fantasy trope known to man.

The writing is the biggest frustration I had with this film. While the dialogue is alright in many points (even if it does rely a little heavy on sarcastic quips), the film suffers heavily when it tries to make a point about racism or rolls its eyes at the concept of prophecy. Let’s tackle the former as I find it to be my biggest sore spot with the writer, Max Landis. Now Landis first popped into the scene with the impressive Chronicle almost a decade ago, but he’s spent most of his time swimming in adulation from his “fans” without improving his dialogue or story chops at all. For Bright, he seemingly got “inspired” by Zootopia‘s deft handling of racial tensions and sought to make something similar but geared more to adults. Ironically, his handling of such heavy subject matter comes across as somehow even more childish than a Disney film, because Landis just won’t stop beating you over the head with the symbolism.

Whether its obnoxious lines of dialogue like “fairy lives don’t matter” or having a character dismiss orc music as incomprehensible or bemoaning the concept of affirmative action, Landis doesn’t seem to realize that a metaphor hits harder when you don’t realize what it is until it’s too late. Additionally, scenes like this are mere token efforts to highlight obviously racist acts as opposed to discussing much more difficult concepts like systemic racism the way Get Out so easily handled and are further more interesting to discuss as they confront the very root of where people’s prejudices lie. Bright, for all its weak ass attempts at seeming cognizant of racial inequality, doesn’t even attempt to get under the surface to expose where the prejudice against orcs even comes from, so the racist acts you witness are simply there to exist and serve no purpose character-wise or even narratively wise.

Speaking of which, the story somehow becomes even more frustrating as it wears on. While I did find the set-up to be a solid start point, around the beginning of the third act you realize that you are in a generic fantasy fluff a la Eragon. Without spoiling, the main characters themselves begin to point out how they themselves are in a traditional story and must see it through to the end. At which point, any feeling of suspense or tension gets curb stomped viciously and the film chugs along to a generic ending despite what promise it started out with.

Now granted, much of what I liked in this movie was thanks to Davie Ayer, who despite being a guy who knows how to only do grimey machismo dramas, he knows how to do it well as with Training Day and Fury. And Bright demonstrates if nothing else, Ayer’s eye for action and imaginative composition of frame when he isn’t being placed under tortuous constraints by the studio as with Suicide Squad. But Ayer really only flourishes when he has the help of a solid script as he does with his best films, and he struggles with weak material like this generic nonsense or with the forgotten Street Kings. Sadly, despite the unique setting, Bright will also be lost to history after two weeks pass and we find ourselves talking about the next Netflix film surprising audiences.

Helping Ayer along is the dual effort of Will Smith and Joel Edgerton, who both rise above the sloppy material and inject just enough pathos to make their bland characters actually seem realistic. Honestly, the film’s racial discussions feel more authentic when these two actors are simply speaking to each other as their characters air their respective grievances against each other and their respective races. Hell, even as the film stumbles along to its predictable conclusion, the two men still found ways to make their dismissal and belief in prophecy sound at the very least relatable. Just such a shame they weren’t given stronger material to work with.

And shame really is the word of the day, because the ideas presented could have been fashioned to an even better film or even better show. The film’s direction and cast were clearly into the production, so it’s such a damn shame that the writing failed to tie it together. I disagree with several critics out there calling this one of the worst films they’ve seen. I suspect this is due to lacking the insanity I possess in watching garbage, and more to do with the fact that the writer is such an unpleasant dickhead online and offline. But Landis is nonetheless the source of many of the film’s problems, and I may have awarded this film a higher rating with even a decent script. As it stands, the movie is a very low…