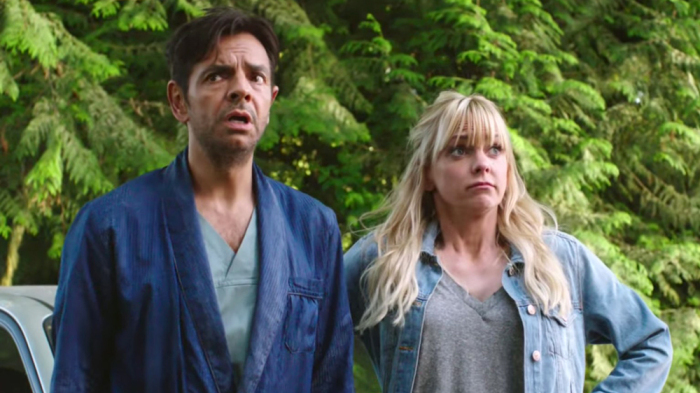 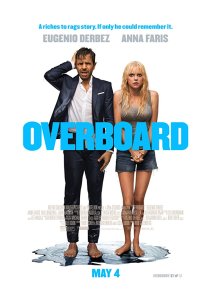 The original Overboard was one of those romantic comedies that I only ever saw in pieces on cable since I was basically an infant when it came out, but it had all the trapping that made a typical Gary Marshall production work. But what I did see was marginally funny, even if the premise of convincing a woman with amnesia that she’s actually some dude’s wife and mother to four rowdy boys is a bit messed up. So the film was one of those 80’s romcoms that were generally left alone from the insane level of remakes from that era. But there’s no desiccated corpse pungent enough to ward off a producer with the stink of death upon them to stick some jumper cables to the rotten gnads of the poor film, and try again.

So instead of a poor schlub and a pampered socialite, we flip the genders to make the somewhat sleazy premise more palpable. So we have a single, working-class mother played by Anna Faris who gets into heavy debt as a result of the antics by a wealthy Mexican heir played by Eugenio Derbez. When Derbez’s character inadvertently goes overboard off his yacht, he gets the long-dead case of movie-amnesia where he doesn’t even remember his own name. Seeking revenge for putting her into debt and desperately needing help caring for her three daughters while she studies for a nursing license, Faris’ character is able to convince Derbez and the hospital holding him that the two have been married for years. Thus, as the saying goes, hijinks ensue…

So compared to this week’s…other “comedy,” I did not loathe Overboard (2018), but I really can’t find much to recommend in it either. Many of the jokes are by the numbers family fluff with the inclusion of some Spanglish humor as the film alternates between English and Spanish. So if you’re not a MAGA-hat wearing dipshit, the humor will be tolerable if not remarkable. I personally got a few chuckles out of some of the situational comedy, even though many of the best punchlines are in the trailer. Somewhat disappointing, but the movie is at least buoyed by the decent performances of Faris and Derbez, even if I could barely remember their character names.

Faris, for her part, can do romcoms in her sleep as she has for the past decade and a half. Derbez is slowly trying to break more into the American mainstream after working for years in various Latin American productions, but I doubt this film and his previous leading role in How to be a Latin Lover, will cement him his sought after exposure. He’s got some decent comedic timing, but it now appears to me that his “shtick,” is trying (and failing) to be a sexy Oscar Romero, thus earning him ridicule. He has more effective scenes when he’s hanging around bonding with Faris’ character’s kids…more chemistry even with them than he does with Faris. The pair seem to like each other well enough, but you definitely don’t get the hint of sexual energy that the film wants you to believe they have towards the end of the movie.

Although it is ironic Derbez walks away with a better relationship with the kids than Faris on account they’re inclusion is more of an afterthought than anything else. There’s supposed to be three of them, but only one gets any significant amount of screen time to show off the dilemma facing the characters. I barely remembering one of the other two speaking at all to be honest. The reason I’m bagging on this aspect of the film is that a major emotional high point is critical on the relationship between Derbez and the kids, and you as the audience couldn’t give on ounce of deep fried shit about the little boogers, because they’re not characters. They are a plot device and nothing more. Which is a shame, because Despicable Me had a similar dynamic that actually worked well in a friggin’ kids movie, and this dull remake couldn’t top an Illumination joint.

The only notable aspect about this film is the prominent casting of Latino side characters, being allowed to speak in Spanish AND nobody’s a gangbanger or a drug dealer! Hey, baby steps right? It’s basically my only hope until I get my Latino blockbuster a la Black Panther. But really, their inclusion is entirely vestigial as the film barely takes advantage of any humor common among Latin communities and instead the film references the absurdity of telenovelas constantly in a weak attempt to compare the plot of the movie to any odd Spanish soap opera. And while I think there’s absolutely potential to rag all over telenovelas in a way that will appeal to mainstream American audiences…this is not the movie to do it.

What we have is a below average romcom that does nothing spectacular, but also doesn’t do anything atrociously bad to piss me off. My theater had a few laughs from others in it, so for the few chuckles I got, I’ll give this a middling…