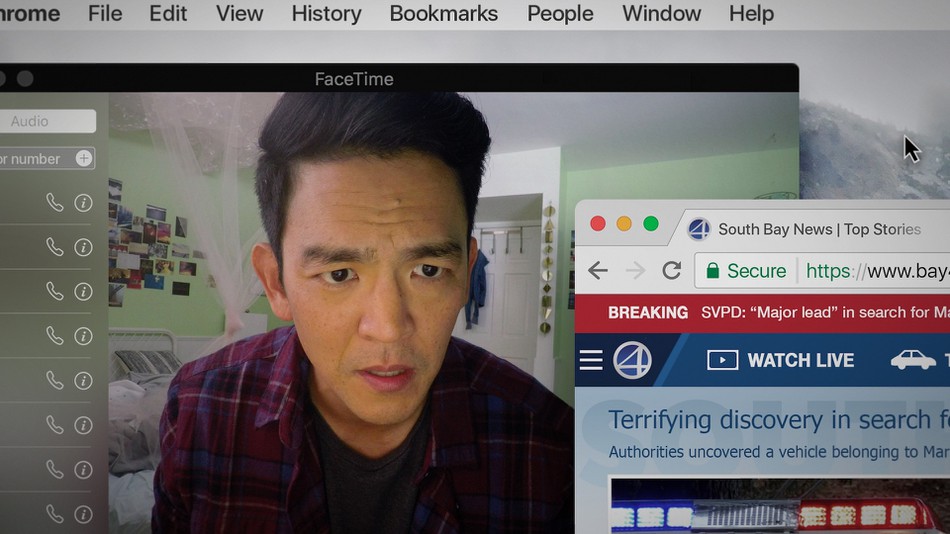 The social media age has its strengths and weaknesses. On one hand, people from world over can connect and share interest with each other. On the other hand, we realize we hate a significant population of the entire friggin’ world while we’re at it based on mean things they say online. It’s a vicious cycle and one that Hollywood has been talking about more and more in recent years. Sometimes, it can lead to some surprisingly thought-provoking results like Ingrid Goes West, and sometimes you get atrocious cluster messes like the Unfriended films. But now we have Searching, a film shot entirely from the point of a view of two laptops and one cell phone that’s acquired a mess of critical praise. Including “best of the year” talk. Is at is good as they say? Read on, because I don’t write a thousand words for nothing.

So John Cho plays David Kim, a recently widowed father of a teenage girl named Margot. The two have become somewhat estranged following the death of the family’s mother, but after failing to come home from a study group where Margot was studying, David realizes his daughter has gone missing. Unfortunately for him, he doesn’t know his daughter all that well and is forced to use her social media accounts in order to piece together where and why she disappeared. Assisting him on the search is Detective Vick (Debra Messing), who investigates any leads David comes across. But as he sifts through his daughter’s social media history, he quickly realizes just how little he knew of his daughter’s personal life and how he may just lose her forever.

The film brings back memories of a George C. Scott film called Hardcore from the 1970s. There too you had a dad realize his daughter is missing and truly didn’t know how she really felt in her life, but the film was a much more straightforward drama that goes into  uncomfortable topics. Whereas Searching proceeds more like a thriller with a gimmick, something more akin to the aforementioned Unfriended films or Blair Witch. To its credit, once you get past the first 15 minutes of set up, the film does indeed deliver on its promise of developing suspense as you’re effectively on the desk of a detective trying to piece together a disappearance. The stakes are raised by the detective-in-question’s own daughter being the missing person, and some drama is thoughtfully created as the detective realizes that he had truly messed up as a parent.

This is where John Cho truly shines by the by. He’s had a very healthy comedy career for most of his time in Hollywood with some brief dips into action here and there. But this is where he truly gets to flex some of those dramatic muscles and demonstrates to audiences he can truly carry a movie and deliver on many an emotionally charged scene. Hell, at one point he has to throw his body on the floor in agony, and I truly believed it despite how cliche such a scene is. But in the moment at the theater, such thoughts didn’t even cross my mind because I was so invested in his quest. It just would have been more helpful had the gimmick not been so slavishly devoted to.

Yeah, unfortunately many of the issues with found footage rear their ugly head in this production despite the stellar acting on display. Granted, the quality of thespians really do distract from all the niggling criticisms of bad cinematography and weird character decisions for demanding to use FaceTime applications where it’s not really appropriate. Still, the pacing of the film helps as each mystery string is pulled revealing more and more important facts about Margot’s life to the audience and David. In the process, you get to sympathize with Margot and appreciate her actress’ solid work from Michelle La, going for a very subdued performance.

Speaking of subdued, Debra Messing had some choice scenes in here as well. Like Cho, she’s renowned for her comedy work, and it’s nice to see such an actor really show off their dramatic potential. Honestly, the director, first-timer Aneesh Chaganty, really demonstrated solid cooperation with his team of thespians to help bring out great performances out of everybody. I’ll keep an eye out for him in the future, and maybe he won’t have to rely on a gimmick next time.

I hate to keep ragging on the gimmick idea, but compared to found footage films like Chronicle or Rec, there’s really nothing outstanding aside from the acting. I was taken in with its suspense, holding myself in the theater away from the bathroom just so I could see what happens next (my girlfriend was in the same boat, to be honest), but then you get to the ending and…without wishing to spoil, I don’t think the film quite sticks the landing. The structure of the mystery all do make sense (even if the film leans a little to heavy handed with a bit foreshadowing early on in the film), but I didn’t feel as emotionally satisfied as I had hoped.

Still, for the brief moments I was taken in with the movie, and the fact it truly doesn’t outstay its welcome at a brisk 102 minutes, I’m willing to give this film an enthusiastic…