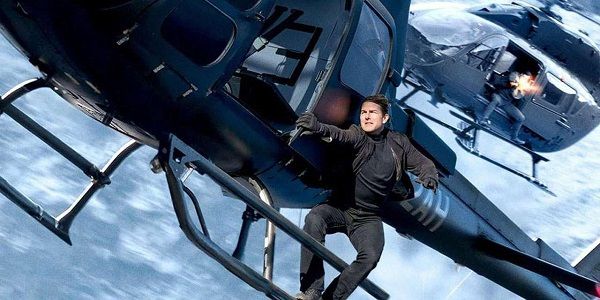 The Mission: Impossible movies have had a very odd trajectory in terms of quality, but one that wasn’t unlike my other favorite action spy series in Fast & Furious. See, both films started off as so-so money makers in the 90s before they both got abysmal sophomore entries that upped everything that held the first film down and made them worst. But then, a miracle happened: they went back to the drawing board and came back with successive entries that have only gone from strength to strength. But whereas Fast & Furious leans on heaping doses of absurdity in both comedy and action, the Mission: Impossible film series goes for a simpler-James Bond fantasy mixed with absurd action set pieces that eschew CGI in favor of death-defying antics courtesy of its ego-maniacal, yet strangely alluring, main star, Tom Cruise. Now, people world over have declared this to be the finest action film since Mad Max: Fury Road, but does it live up to such dizzying hype?

Well we once again find ourselves in the company of Ethan Hunt (Tom Cruise), lead agent for the Impossible Mission Force (IMF), on the hunt for some good ol’ plutonium that will be used for destructive purposes by an anarchist group calling themselves the Apostles, lead by the elusive John Lark. However, Ethan makes a tough call to save the lives of his crew, Benji (Simon Pegg) and Luther (Ving Rhames), at the expense of losing the plutonium thereby jeopardizing the whole world. Seeing Hunt as untrustworthy, the head of the CIA (Angela Basset) forces Hunt to cooperate with her best agent and assassin, August Walker (Henry Cavill), to track down the plutonium and stop John Lark. But as with all of Ethan’s missions, things never go as planned, forcing him to improvise  solutions as he goes along made doubly troubling when dealing with a psychotic arms dealer (Vanessa Kirby), his nemesis from Rogue Nation (Sean Harris), and his flirtations with MI:6 operative Ilsa Faust (Rebecca Ferguson).

While being jam-packed with an ensemble cast, this is surprisingly the easiest Mission: Impossible film to follow since my last favorite of the franchise, Ghost Protocol. There’s still plenty of twists and turns both predictable and genuinely surprising, but what really sells your connection to this film is watching Tom Cruise interact with his versatile cast. I’ve long maintained that Cruise’s greatest strength as an actor is his natural charisma, even when he’s acting in absolute dog shit. But give him a competent script and thespians who give a shit, and the man’s magnetic draw is practically unstoppable, much like his penchant for desiring to perform increasingly dangerous stunts for a man of his age.

But those stunts are truly what have made the Mission: Impossible films an entertaining prospect every time they show up in our neighborhood. Entirely reliant on practical effects and Tom Cruise’s mad desire to throw his body into severe danger, the stunts of Fallout are truly in a class all on their own. While I wouldn’t say its better than Fury Road, George Miller would surely give major props to Fallout‘s director, Christopher McQuarrie, for trying to at least advance the world of filming stunts to interesting new heights. Between an impressive sky diving sequence that almost looks like a one shot, solid punch-ups, a spectacular motorcylce/car chase scene, and one balls-to-the-wall helicopter duel; there was plenty to admire in the long-time Cruise-confidant’s style. Most importantly, they genuinely feel like great thriller fodder, consistently tying you up into knots even as you know the protagonists have a pretty good chance of surviving.

But as I’ve stated multiple times, great action means nothing if I care nothing for the characters, and thankfully McQuarrie made damn sure to give each and every team member of the IMF a time to shine in order for you to give a damn what happens to them. Simon Pegg and Ving Rhames are great fun as always, and Rebecca Ferguson continues to show off her impressive acting range and ability to embrace physicality. But the true surprise of the cast came from none other than Henry Cavill. Now, as you all may know, I personally have not been…fond…of Cavill’s portrayal as Superman. But Cavill really does excel here in his most antagonistic role to date, and that may be the key. As my girlfriend pointed out, Cavill’s attitude off-screen has always been that of a scumbag, so his attempts to come across as the savior of humanity always came across as fake. But playing a character with major darkness surrounding him, makes feel right at home and makes me forgive his many, many transgressions.

In terms of complaints, there’s not much to go around at all. I guess it is a bit long in the tooth as it clocks in at a dizzying 147 minutes, but you barely feel the length of this production. Mostly because I was having so much fun watching Cruise ran his ass off and perform life-threatening feats born from his psychotic desire to prove he’s a king in the action realm, and watching the cast quip to each other on how they’re going to find a way out of this mess. Fallout captures the best of the Mission: Impossible films by looking like nothing is planned but still having the well-tempered execution to give you a quality product. So it easily secures the best spot of the whole franchise, and quickly making me forget Cruise was ever involved in a laughable attempt to make a cinematic universe out of the Universal Monsters.

But one narrative complaint I can state with certainty is that several bit characters from previous films make a reappearance that don’t feel like an actual conclusion to their arcs…mostly because they weren’t given arcs at all so any narrative payoff was lost on them. This goes for Alec Baldwin’s role as director of the IMF gets unceremoniously shortened and for Ethan Hunt’s ex-wife that we haven’t seen for three entries, played by Michelle Monaghan once again. But the biggest waste goes to Sean Harris’ Solomon Kane. Aside from being virtually unrecognizable from his last screen appearance and sporting a completely different outlook than last time, he feels like the series’ least threatening antagonist that everyone else hypes up to be the biggest bad ass of all time. But he’s mostly a punk if I’m being honest.

But at the end of the day, Mission: Impossible – Fallout stands as a solid blockbuster in a sea of forgettable action films, and one you should definitely check out if you’ve put off the series or Tom Cruise out of your viewing schedule. Trust me, it’s worth the look because this is a solid…