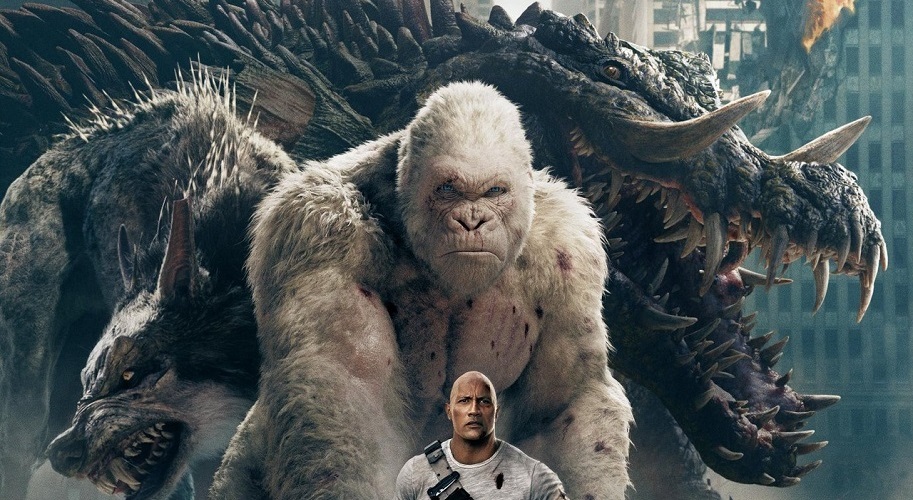 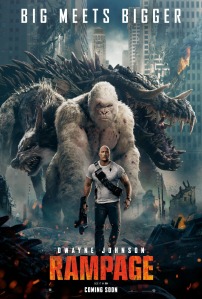 Put in quarters (or hit up my Patreon) for more videos:

The pursuit for the “best” video game cinematic adaptation has been a fruitless endeavor by fans of the medium, and a source of frustration for film studios who are looking to kick start a new franchise to make bank on. Part of the reason most video game films tend to suck are because the source material are usually derivatives of other, well known films; and even those with unique premises are explained up and down to oblivion. So it’s depressing that the “best” video game film held by many fans is still Mortal Kombat (1995) which is now pushing 23 years of age at this point and is pretty much only entertaining on a “so bad, it’s good” angle. So here comes The Rock, one of the most overexposed actors out there, reteaming with the director of the boring San Andreas to make an adaptation of a simplistic arcade game where you controlled giant monsters tearing up a city and…that’s it, that’s your plot.

For the cinematic version, Dwayne “The Rock” Johnson plays a primatologist with a name I can’t be arsed to look up (and let’s face it, he’s basically the same character he always plays) who is a fierce protector of the apes in the San Francisco Zoo, particularly a rare albino ape named George. Unfortunately for George, the ape discovers a broken gas containment unit that crash landed in his enclosure which starts accelerating the ape’s strength, speed, regeneration and size. As George expands as large as a tank, a scientist named Dr. Kate Caldwell (Naomie Harris) approaches The Rock and explains the primate has been exposed to a chemical that alters a creature’s DNA with other aniamls in unpredictable ways, including heightening aggression besides the whole growth spurt. Soon the pair discover that George isn’t the only creature affected by the strange chemical that was created by a company with a cartoonish pair of leaders (Malin Åkerman & Jake Lacy), and soon have to deal with an enormous wolf who can fly and a giant alligator with spikes all over its body who are all being summoned along with George to somewhere in Chicago. Amidst all this chaos is , I mean Jeffery Dean Morgan continuing his Neegan shtick as a government agent who corners the Rock and his new scientist friend on how to stop these gigantic monsters.

The plot is paste-drinking moronic as you can tell, but I must confess that the beginning was actually doing a good job of drawing me into this weird world. For one thing, the film’s focus was on The Rock, and if his films of the past twelve or so years have taught us anything: the guy has a ton of charisma with oodles to spare. Additionally, he’s shown to have a great dynamic with George the Ape, who was the only creature in the movie to be animated through motion capture thanks to Jason Liles’ acting, which sells you on a much needed emotional core that makes the final bout between all the monsters satisfying and gets you invested in the results of what happens next. Hell, I even bought The Rock constantly calling George, “my friend,” that I genuinely started to believe it especially as Dwayne Johnson had to show concern for the creature. So it actually breaks my heart that the rest of the movie couldn’t live up to this dynamic, because the strong beginning and satisfying end is bridged by the clumsiest, stupidest and most tonally-disconnected second act that I’ve seen in a long while.

Problems start to rear their ugly head upon the introduction to the sinister head of the most unnecessarily evil corporation since Umbrella. This CEO, Claire Wyden (played by Malin Åkerman) acts like a friggin’ cartoon as she casually talks about murdering people to get her way, when there are literally dozens of easier ways to solve her problems. Her brother, played by Jake Lacy, acts like a bumbling idiot who can’t stop munching on Pop Tarts (because I guess the character needed a brand name tick?) as he gets bossed around by Åkerman’s wannabe Maleficent act. Speaking of acts, let’s talk about Jeffery Dean Morgan, or as my favorite critics call him, “Mr. Lean,” because this dude re-transports his whole gag he does on The Walking Dead with significantly less cursing, so what’s the bloody point? It doesn’t help that his character’s whole cowboy drawl complete with a pearl-crusted handgun doesn’t even fit with the soft science action angle the film is mostly going for and would succeed were it not for these bizarre, tonally-inconsistent intrusions.

The monster introductions are handled slightly better, because the visual effects (if nothing else) at least look decent (but that’s not really an outlier these days). However, while George was the only one of the three giants to be afforded any level of character thanks to sign language, the other two are just over-designed monstrosities that look sillier the longer you look at them. See, George merely grows in size but doesn’t experience any other major changes to his physiology; but the wolf and the alligator both end up growing all manners of spikes in random places and the former can friggin’ fly like a squirrel for no reason. Actually the film does give a justification for this, but it’s handled so sloppily that I wouldn’t be surprised if most audiences didn’t actually catch that. Also, there’s one really dumb plot hole involving the alligator (which is not a spoiler as it was shown in the trailers and posters) because everyone realizes there is a giant alligator tearing up shit when it’s far too late…even though with the path that it took to get to Chicago from the Everglades would definitely raise a few eyebrows even if you believed the movie when it says that the creature hid entirely in the water up to the final moments of the film.

But hey, at least when the three monsters wind up in Chicago, the movie’s final 45 minutes gives you everything that was promised in a Rampage film: non-stop destruction of property and accruing a high body count while they’re at it. Honestly, it’s at this point that I realize that this was probably going to be the best version of this idea that we were ever going to get out a coin-draining experience in old arcades. The action looks slickly presented and like Pacific Rim: Uprising, everything occurs in broad daylight so you can appreciate all the carnage as opposed to everything being covered by a dark haze of rain and nightfall. There was a, well there’s no euphemistic way to say this: a scene involving a collapsing building that looked identical to the fall of the World Trade Center. I’m aware that some people have a visceral negative reaction to such imagery, so be warned: Rampage does not shy away from using it. Still, the scene also stuck out in my mind, as the stupidity of the film’s premise bubbled to new heights when our main protagonist in The Rock pulls off such superhuman feats that you would be forgiven if you believed he was exposed to the same chemicals as the animals were.

These are not spoilers, but by God I have to mention how idiotic these scenes played out. See The Rock gets shot in the gut at point blank range and keels over in pain…few minutes later he’s jumping and running around like he just got a flesh wound as he proudly proclaimed the bullet merely went right through him without hitting any important organs….oh but the bleeding out was apparently not a concern to him. And like Liam Neeson in The Commuter, the film contrives a reason for him to “special skills” so he can engage in hand-to-hand combat and be able to operate military weaponry with near perfect precision. Also, he manages to break out of a handcuffs, escapes a falling plane in a way eerily similar to the same stunt Tom Cruise pulled off in his last Mission: Impossible appearance as well as in The Mummy (2017). It’d be one thing if the filmmakers came up with something clever for this sequence…but they didn’t, it just feels like a straight rip off of what happened before. In a movie with giant monsters, the filmmakers really shouldn’t be digging around for stunts that are now apparently mandatory to have your film now (because I just realized XXX: The Return of Xander Cage ALSO had a similar stunt).

Still, as another entry in the kaiju genre, it’s a fine film. However, a knock against Rampage is that it tries to play it’s silly concept straight save for the aforementioned moments of goofy hilarity that don’t mesh well together. Compared to Kong: Skull Island, which at the very least kept a consistent tone and stuck with it despite how silly the idea was on paper. But Rampage‘s problem is that it didn’t know if it wanted to like the new wave of Godzilla and Kong films or have wacky hi-jinks. Be serious or be ridiculous like the Fast & Furious series Rampage, people will appreciate you more if you unabashedly adore what you are. Flipping between these two extremes just makes everything look clunky and dumb.

With all that said, I thought the movie was a step above Pacific Rim: Uprising in the action and character department, but not by much. Further, even compared to the competent Tomb Raider reboot, it was at least memorable which is more than I can say for Alicia Vikander’s attempted franchise vehicle. So I’ll give this a very low…