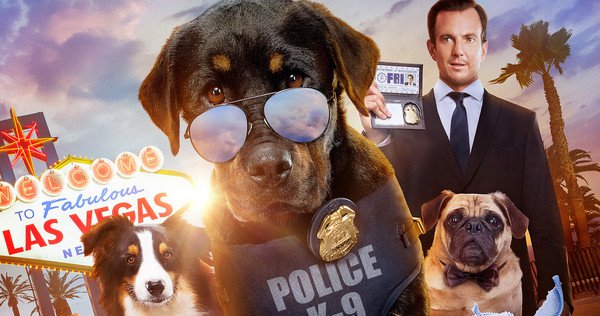 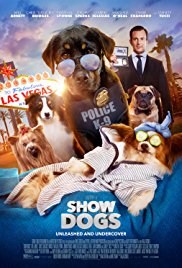 HAVE YOU LEARNED NOTHING, HOLLYWOOD?

Nearly two years ago, I reviewed a movie called Nine Lives, an abysmally bad family movie featuring Kevin Spacey as a talking cat that went on to claim a spot on my coveted Worst of the Year list. I also suspected Spacey agreed to film the movie in the first place as a result of some blackmail for an unsavory crime involving a goat. Turns out I wasn’t too far off the mark. So I can only imagine what sort of heinous acts Will Arnett and Ludacris have committed in their lives, that they agreed to this atrociously bad talking dog movie that I saw for your sick amusement. Well, let’s not waste any more time and dig in to what’s yet another fierce contender for absolute Worst of 2018.

So Ludacris, fresh off his Fast and Furious success, voices Max, a Rottweiler with the NYPD, who is investigating an illegal animal smuggling operation that has kidnapped a baby panda. In the middle of a sting operation, Max crosses paths with FBI agent Frank (Will Arnett cursing his latest Lego Batman success), and the pair are forced to team up and infiltrate a dog show in Las Vegas in order to stop the dastardly smugglers from leaving the country with the precious panda. Along the way, Arnett learns to like animals, Frank learns to trust humans, and both run into zany characters like a French-accented Papillon (Stanley Tucci embarrassing himself further in the entertainment industry) that trains Max to become a prime candidate for the dog show, Jordin Sparks as an Australian Shepard that serves as our hero’s love interest, and Shaquille O’Neal as a zen-loving Komondor. Clearly a lot of work was put into this majestic production.

Alright now before I hear the inevitable, “What did you expect from a children’s movie,” I like to make it clear that I’ve seen practically dozens of children’s films that do not insult my or the intended audience’s intelligence. But every now and again, I come across such a lazy and cynical cash grab, that I’m forced, nay compelled, to write a bunch of mean words about how the film compares to a miscarriage. THAT is why I do what I do. For as it is written, “Yea, thou I walk through the valley of the shadow of death, I will fear no evil, for I am the most insane fucker in the valley,” Jaramillo 4:69. Wait where was I? Ah yes, this piece of shit.

Right from the word “go,” this film decides to start pissing in your cornflakes. Every other line of dialogue is a pet-related pun or nonsensical joke referencing animals such as “He can flip this bird off any day.” The lip-syncing for these animals is poorly animated as well, with some frankly off-putting computer effects that digitally alter these dogs’ faces into unholy abominations or make them actually do a dab.  And lest we forget, some really awfully filmed pratfalls courtesy of Will Arnett, who may just be trying to throw a hip in order to collect on some insurance money. But what really sinks this whole production is just what a shameless ripoff of Miss Congeniality this movie becomes.

Now this will sound positively batty, but…this could have worked. The trailers were indicating that humans and pets conversed with each other like it’s the most normal thing in the world, and such an odd set up could lead to all sorts of comedic potential. The problem is that Show Dogs‘ comedy is majorly predicated on the fact that humans just don’t what’s going through the minds of animals at any given time, which is shorthand that we’ve been exposed to as audiences since birth. What’s even stranger is that the film can’t decide if the humans really know what the dogs are saying or if it’s just plain bad writing at play (mostly the latter) as the film tries to brazenly rip off Sandra Bullock’s opus.

Max has to go through the usual makeover job that Sandra Bullock made funny because she was constantly ad libbing quality jokes and making appropriate faces to what was being done to her. Rather than animate on the dog a face of displeasure, you get Ludacris saying a badly written quip in the same tone he purposefully uses in this entire film. And see I know Ludacris is doing this on purpose, because I’ve seen him give appropriate emotional reactions when he’s driving away from a friggin’ nuclear submarine. He does not say every single line in Fast and Furious like he’s high as fuck and/or drunk off his ass. But for Show Dogs, he likely recorded every single line from the comfort of his home where he had all sorts of access to mind-altering substances; and I’m only mad at him because I couldn’t have access to the same vices he clearly did when going to work.

But the person I feel truly sorry for is Will Arnett, who probably has a few dead bodies buried in shallow graves that the producers clearly know about, because he so very obviously does not want to be here. Between mumbling more than half of his lines, over-exaggerating every pratfall he makes, and having the face of a guy who wished he was dead every time; I felt a tinge of pity as he humiliated himself in service of the Almighty Dollar. That was, until I remembered he was likely paid millions of dollars to suffer such an embarrassment, whereas I had to burn a MoviePass day on this execrable piece of shit. That removed any ounce of sympathy I may have had towards the man.

So we covered the terrible jokes, the awful writing, the bad acting, the abysmal special effects, and the insipid plot; so is there anything of worth to be found here? Honestly, I couldn’t find one positive thing to say about this thing, so I browsed other critics to see if they had any iota of praise for it. The only compliment I found across the board was that “kid will probably like it.” Well, I was in a packed theater of multiple children under the age of 8 and…they talked through the entire film. No, they were not talking about the movie, they were just talking about other random things because they were so obviously bored by this train wreck. Hell, across the rows, kids were wandering around the aisles as their parents shushed them into silence. This was the killing blow for me. Because I’ve sat in many a theater for children’s movies like Coco and Cars 3, and they dutifully shut the hell up because they want to know what happens next. But for Show Dogs, these kids couldn’t give one ounce of a deep fried tampon if the heroes succeeded or not.

This is the rare film that has no reason to exist whatsoever. It doesn’t entertain any section of the audience, and it’s just an agonizing experience to sit through. You know where this is going, so I won’t belabor to the point and give this movie the rating that it deserves: